Round handle and pointed spoon

European-style Western cutlery for household use 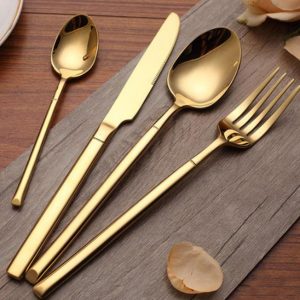 Cutlery culture
1. The function of the knife and fork is to cut. In a quantitative set meal, the big ones are cut into small ones, and the small ones are cut into smaller ones. This continuous cutting action from big to small has cultivated Westerners. Logical thinking from appearance to essence.
2. The cutting of knives and forks represents power and is rigid, imposing violence and coercion on the object of choice. For example, use a fork to hold the food, force it to fix, and then use a knife to violently cut it.
3. Knives and forks are metal objects and are non-renewable limited resources in the natural environment. While satisfying their own needs, Westerners express the excavation and possession of resources, which are profit-seeking and profit-taking, which is what the Easterners think The villain approach.
4. Knives and forks are one-way cooperation of both hands. What they pay attention to is holding a group and fighting the world. What they advocate is a team spirit.